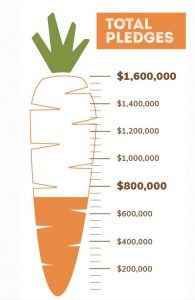 Your Co-op’s first phase of its capital campaign was a great success! We are incredibly thrilled with the support of Co-op owners – and community members – during our campaign phase that ended on March 31. We are excited to report that the campaign raised $725,191!! Every single contribution from $10 on up helped – thanks to all the lenders and donors! In addition, special thanks go out to all who volunteered – over 925 volunteer hours were contributed during the campaign!

Now let’s answer your questions as we provide an update on our work, details about what we’ve raised, and what’s coming up.

How Did We Do in Our Campaign?

As we mentioned, the Co-op raised $725,191 towards our goal of $1.6M. That amounts to 45% of our goal raised in Phase I. (As a comparison, Prairie Foods Co-op, a start-up food co-op in Illinois, wrapped up its first campaign phase in May with 30% of their goal raised.) Let’s take a closer look at our contributions:

With over 422 contributors towards our campaign, it shows a great amount of support, plus how successful our volunteer callers were in reaching Co-op members. In addition, this represents close to $100,000 raised per week!

One final note about the campaign results has to do with the two types of support. Our overall goal was to raise about 50% through member loans and 50% through donations. As you can see from the data above, we’ve raised slightly more through loans. This is one of the things our committee and board will be looking at as we move forward.

After Phase I of the campaign ended on March 31, our committee has been doing a lot of “behind the scenes” work. That entails wrapping up the legal paperwork associated with loans, depositing checks into our escrow account (where funds will stay until we reach our goal) and handwriting thank you notes to every contributor!

A key member of our campaign team is the database. The Rooted Carrot secured a database system to help track all of the phone calls, texts, decisions, pledges, and checks. The system we used was one of the very first campaign trackers built for food co-op campaigns, and the first-ever used in a live campaign! We worked diligently with the database designers in getting things ready for our launch and helped provide critical feedback on the tool during the campaign. We are now transitioning the data to a more robust data management system – one that has learned a great deal from our experiences and feedback.

Are You Still Campaigning?

Yes! We are still actively raising funds for the Rooted Carrot, but this is happening a little more quietly. Co-op volunteers are actively meeting with members to discuss loan and contribution options – we’re just doing this in a less public way than what was done in the spring.

The board is committed to providing you with regular updates on the campaign as well as news about the next public phase once the dates are set. Keep your eye on the Co-op’s social media pages, as well as the Garlic Press for these updates.

If you missed the chance to contribute during the public phase of the campaign, don’t forget that details on how to contribute to this campaign can be found on our website. Every dollar counts and we need YOU.

Are We Going to Reach Our Goal?

Yes! The Co-op board wants you to know that we are fully confident that our campaign will be successful in securing $1.6M. Here is why:

Phase I Was a Success

Other than not wrapping up the whole campaign in 2 months, every other goal in Phase I was successful – reaching 10% of the goal by the launch date, securing a lead loan of $100,000, and having two successful “match” campaigns.

Having 422 contributors in a community with a population of over 100,000 shows a huge potential. In addition, there are over 640 members who still haven’t yet participated—another indication of potential.

Over the summer, the Co-op plans to grow membership numbers so by the time we enter Phase II, we’ll have even more potential contributors for the campaign.

The campaign committee and volunteer callers became seasoned professionals by the end of the campaign, which only means we’ll be better poised for Phase II.

Our committee is continuing to have conversations with owners and community members to discuss participation in the campaign (it’s not too late if you still want to contribute!) and we are regrouping and setting plans for Phase II, the next public phase of the campaign, which will take place in late summer or early fall. This involves updating some of campaign materials, recruiting some new volunteers, and setting up and learning our new database system.

Our plan is to secure at least 50% of our total campaign goal by the time we launch Phase II.

How Can I Help?

There are many ways to help with the capital campaign. As the saying goes, many hands make light work.

Again, thanks for everyone’s support so far. We can’t wait to launch Phase II and reach our goal this fall! Please contact Committee Chair Tom Wickersham if you have any questions.

Become a Member-Owner
Volunteer
We use cookies on our website to give you the most relevant experience by remembering your preferences and repeat visits. By clicking “Accept”, you consent to the use of ALL the cookies.
Cookie settingsACCEPT
Manage consent

This website uses cookies to improve your experience while you navigate through the website. Out of these, the cookies that are categorized as necessary are stored on your browser as they are essential for the working of basic functionalities of the website. We also use third-party cookies that help us analyze and understand how you use this website. These cookies will be stored in your browser only with your consent. You also have the option to opt-out of these cookies. But opting out of some of these cookies may affect your browsing experience.
Necessary Always Enabled

Performance cookies are used to understand and analyze the key performance indexes of the website which helps in delivering a better user experience for the visitors.

Analytical cookies are used to understand how visitors interact with the website. These cookies help provide information on metrics the number of visitors, bounce rate, traffic source, etc.

Advertisement cookies are used to provide visitors with relevant ads and marketing campaigns. These cookies track visitors across websites and collect information to provide customized ads.

Other uncategorized cookies are those that are being analyzed and have not been classified into a category as yet.