In November, the Co-op launched its own monthly virtual cooking show on Facebook Live. Volunteers Anna Bandfield and Luann Alemao have put together an interactive show featuring local ingredients and taking questions from viewers.

Luann is a food and nutrition educator and speaker. She taught junior high, high school, and at UNI. Luann is passionate about healthy lifestyles and is a trained Blue Zones speaker. Hosting cooking classes is a familiar role for Luann so it was a natural fit for her to host The Co-op Kitchen. However, with in-person classes cancelled because of the pandemic, Luann admits she was in unfamiliar territory hosting an online class. “The technology was a little bit of a challenge for me,” Luann admitted. “I didn’t think I could get the same level of engagement and interaction with a virtual class.” 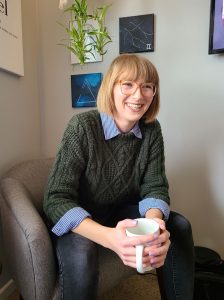 That’s when Anna Bandfield stepped in to help. Anna graduated from the University of Northern Iowa in 2020 with a degree in public health. She is currently working for the UNI Local Food Program to increase access to fresh, local produce in the Cedar Falls/Waterloo community. Anna started volunteering with the Rooted Carrot Co-op in November, when the idea of having a virtual cooking show came up. When Luann expressed she was nervous about the format, Anna offered to help.

They quickly fell into complementary roles. You could say that Anna is the producer and Luann is the host! Together they continue to learn and grow the show. “It’s really been fun,” Luann said. “I am learning things and thinking of new ideas every time we do the show.”

In the January episode of the cooking show, Luann talked about types, storage, and ways to use sweet potatoes. If you’re interested in watching, but are unable to tune in during the live show, all of the videos can be found at the Rooted Carrot’s YouTube channel.

Luann and Anna will be live on the Co-op’s Facebook page every third Tuesday of the month at 3:30pm. February’s show will be a honey of a topic! That’s right, Luann will be talking about the essence of honey. Tune in on February 16th for great recipes and to learn more.