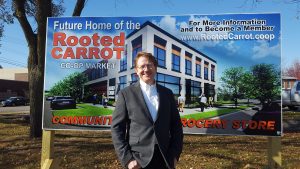 Tom Wickersham has been a Board Member since incorporation in the fall of 2014 and Board President until last August. He also served as President during the years when we had a steering committee getting things set for incorporation, 2012-2014. He is now the Co-Chair of the Capital Campaign Committee.

What does Tom do when he is not attending a Co-op Board meeting, Branding committee meeting, Capital Campaign committee meeting, or Capital Campaign subcommittee meeting? He is the Program Director at the Community Foundation of Northeast Iowa. He oversees the grants and scholarship program. The Foundation awards roughly $6M annually to nonprofits and students pursuing post-secondary degrees. He has been a part of that team for 8 years. He also serves on the Public Arts and Acquisitions Committee for the Waterloo Center for the Arts and on the Advisory Board for UNI’s Nonprofit Leadership Alliance. When he isn’t volunteering or working he can be found fixing up their old house, working on woodworking projects, and cooking.

Tom and his wife Melanie are proud residents of the Cedar Valley, having moved here from St. Louis in 2012. We have a small dog that is an honorary volunteer for the Rooted Carrot. Why has he worked so hard these last 8 years to bring a co-op to the Cedar Valley? “I did a lot of volunteering, plus a paid gig for a while, with the Davis Food Co-op from 1999-2005. During that time I became a big fan of the cooperative model. Now, during a global pandemic and a divided nation, my belief is even more in the cooperative approach, and how it has the ability to make the world a better place. The cooperative model fits so many sectors of our society, and has shown to be an effective tool in business, education, governance, and more. I believe starting up a food co-op is only just the beginning for our region!”