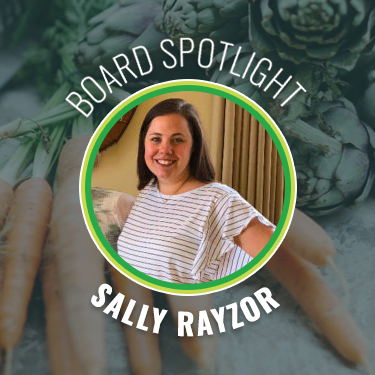 Did you watch our site announcement last Monday? Did you hear the fabulous Co-op cheer performed by the Cedar Falls High School cheer-leading squad? You have Sally Rayzor to thank for that along with much more. She is one of our Co-op’s most enthusiastic cheerleaders and fans!

Before Sally and her family moved to the Cedar Valley in the summer of 2017, they were already member-owners of the Rooted Carrot Cooperative Market (then known as the Cedar Falls Food Co-op). Why did they invest prior to their move? The Rayzors were moving from Ames, Iowa where they were proud members of the Wheatsfield Co-op. Sally tells us,  “I love what cooperative grocery stores stand for, and I know what a treasure these stores are to their cities.” Consequently, she was thrilled to learn about and support our efforts here in the Cedar Valley.

Soon into her move, Sally rolled up her sleeves and got to work as a volunteer, assisting with outreach, communications, events, and most directly as a member of, and later chair of, our operations committee. This led to Sally running for the board, through which she has remained active and engaged – including while pregnant with her third daughter who is now 9 months old! Sally’s family has been a great support for her and our Co-op – attending events and even marching in the Sturgis Parade. Following in her mother’s footsteps, Sally’s oldest daughter came up with some creative Co-op cheers during the last Sturgis parade to the delight of all participants. And her middle daughter was our “poster child” last month in the site announcement social media posts titled “Coming Soon” (featuring her sitting in a grocery cart).

Sally’s career has been in retail buying and fashion merchandising. Currently, her time is spent being an at-home parent, which is a full-time role particularly during COVID-19 times. She says, “All of this time at home has really brought out my DIY spirit, and I have started a ton of house projects!” She also is the leader of her eldest’s Girl Scout Troop. When asked about other interests, Sally talks about hiking as well as her love of travel and exploring new cities – with a highlight being trying out the cuisine.

Sally’s enthusiasm for her work with the Co-op is contagious. In her words, “I’m excited to help bring such a gem to OUR city!” We are grateful that the Rayzors moved to the Cedar Valley and that Sally is sharing her skills and expertise with your Rooted Carrot Co-op.