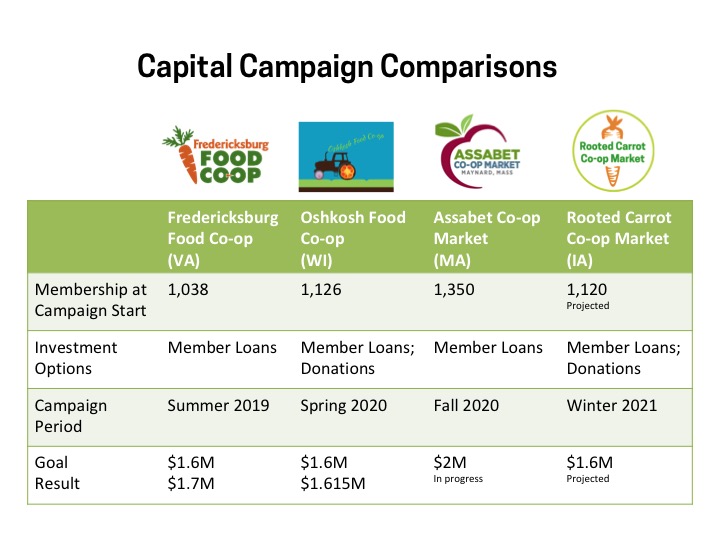 Did you know that there have been over 125 start-up food co-ops to open across the U.S. in the last 2 decades? These communities know the value of keeping their dollars local, and they’ve realized one of the best tools to keep money circulating in the local economy is to create a community-owned grocery store. The greater Cedar Valley is doing the same thing by launching the Rooted Carrot Co-op Market.

And while there are a number of differences among these recently opened food co-ops, one thing is consistent across all of them: They all raised over 50% of the funds needed to open the store from its member-owners.

In addition to the revenue from member-owner shares, these co-ops conducted capital campaigns to raise, in some cases, as much as $2 million. That’s right, members of these co-ops purchased shares in their co-op, and then made additional investments. The revenue from the shares were used to help develop the business model, run the operations prior to having a site, conduct market research, and so on, while the funds raised during the capital campaign were used to purchase equipment (refrigerators, shelving, carts, point-of-sale systems, etc.), modify the building for a grocery store’s needs, and hire staffing necessary to run the store.

When will the Capital Campaign take place?

Along with the Co-op’s board, a volunteer team is working on plans to launch our Capital Campaign in January. The plan is to raise the funds within 8 weeks.

What is the Campaign goal?

The projected goal is to raise $1.6 million. These will be raised through two different options – member loans and tax-deductible donations.

What is a member loan?

Instead of taking out a big loan with a bank, the Rooted Carrot Co-op Market will instead take out many smaller loans with its members. As a member-owner in Iowa, you can transfer funds that you might have in a CD or a money market to instead invest in your Co-op. This is a win-win – member-owners win because they will be able to earn a better rate than the CD or money market provides will also getting the opportunity to invest in our community; and the Co-op wins because we’re borrowing money at a lower rate than the bank will charge us. This unique opportunity is available ONLY to Co-op owners and residents of the state of Iowa.

How can we make a charitable donation? I thought the Co-op wasn’t a nonprofit?

How can I help?

Thanks for asking! There are 2 great ways to support this effort. The first is to be a volunteer caller during the campaign. The second is to let the Campaign Committee know in advance that you are interested in investing. Please contact Committee Chair Tom Wickersham if you wish to help and/or invest in the upcoming campaign.