Because I am recovering from a knee replace along with my friend Joy, I think of things I want to do, but really can’t. So, I dream of walking in the woods on a crisp day. The trees are yellow and red and gold. A light breeze is blowing the leaves into a dance at my feet. The squirrels are playing in the trees; they are of course a bit plump as they eat their way towards winter. As I near the car, my steps move a little faster.

Now my haste is not to plump up for winter, but to heat up a bowl of butternut squash soup, slice a loaf of sourdough bread and slather that with real butter for a soul-satisfying meal. The last farmers market had all kinds of wonderful squash and a fat squirrel-bodied butternut caught my eye. Therefore, I thought I might share with you a favorite fall soup. And, if you don’t have butternut squash, that’s okay – this can be made with other kinds of squash. 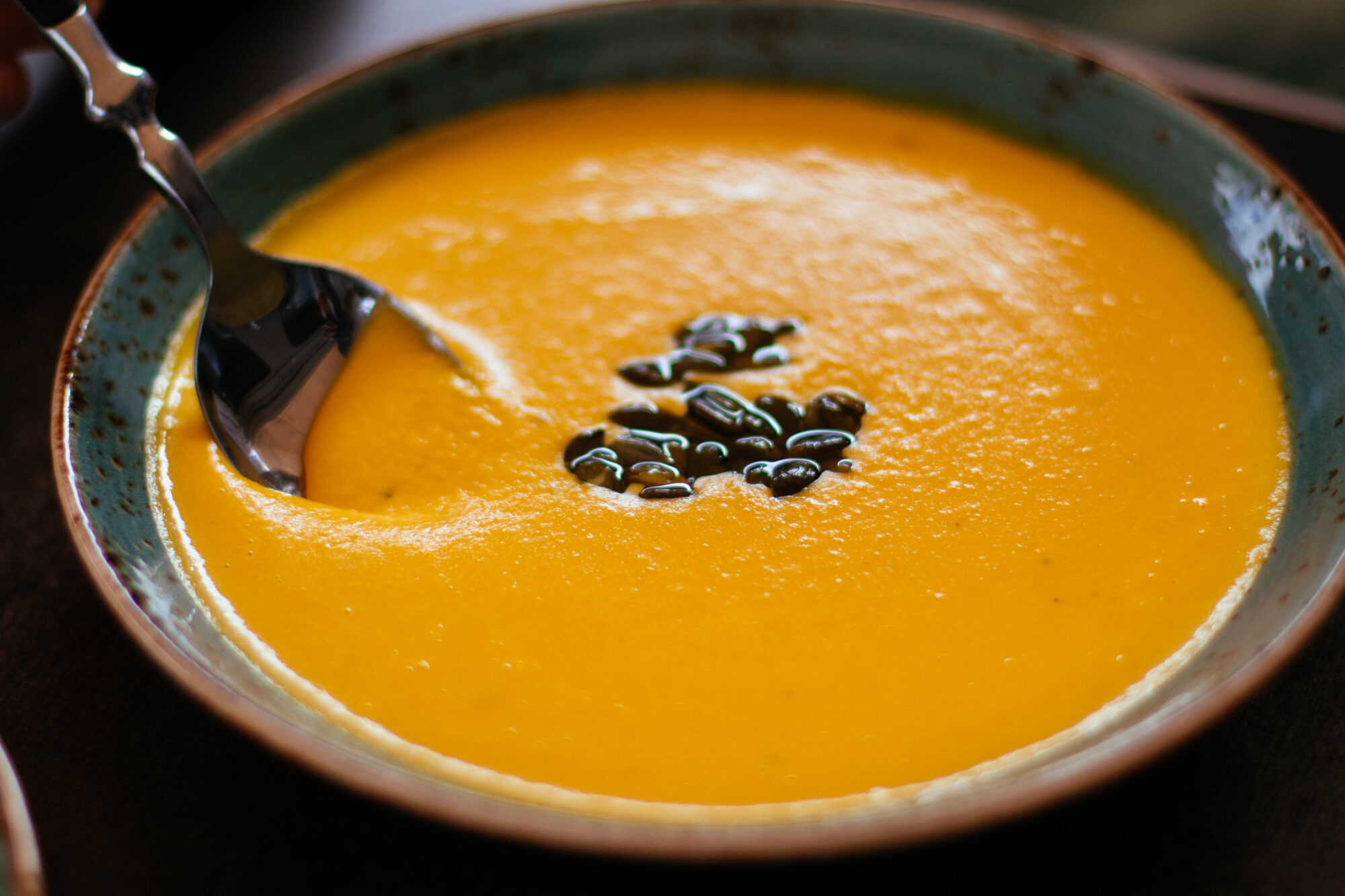 END_OF_DOCUMENT_TOKEN_TO_BE_REPLACED

Have you heard of the 7 Cooperative Principles? They are what we base our co-op model on (as do most co-ops). One of the principles we highlight often is the seventh one, which is Concern for Community. And what better way to show this principle than supporting other organizations in our area who provide for our community! Your co-op recently learned about a great opportunity to do so that is coming up this month, November 25 – 27 at the Northeast Iowa Food Bank. They will be having their annual Thanksgiving Holiday Distribution and need volunteers to help with it. 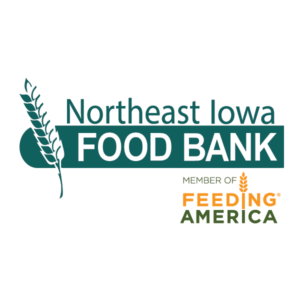 The Food Bank has set a goal this year to feed more families than ever before, and we hope to help them get there by encouraging YOU, our co-op member-owners and friends, to help out. What a great opportunity for a family to volunteer together or for you to get a group of your co-op friends to volunteer at a time convenient to you!

There is a wide variety of help needed including food carry out, food distribution, and traffic control. This, along with the many time slots and activities available means there are plenty of volunteer opportunities for your group or you as an individual. If you do volunteer, we encourage you to wear your Co-op t-shirt (if you don’t have one, we have them for sale – contact info@cedarfallsfood.coop).

If you have any questions about this project, please contact Dan Bohnker (Northeast Iowa Food Bank) at 319-235-0507. We hope to see a lot of Co-op shirts throughout these 3 days – feel free to take a photo to send our way. See you at the Food Bank!

In this season of giving, we are excited to announce that five member share scholarships were recently awarded, thanks to the generosity of other Co-op member-owners! As noted in last month’s Garlic Press newsletter, we opened up our second scholarship season, offering $100 scholarship opportunities for community members who have been unable to purchase a member share due to financial constraints. 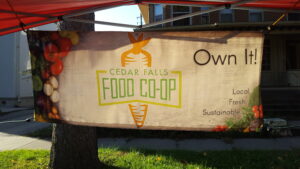 October is National Co-op Month, and we were thrilled to be able to celebrate by giving back in this important way. Scholarship recipients pay half of the total member share cost of $200. Support for this scholarship program comes through donations from member-owners.

We hope to be able to offer this scholarship opportunity each October, if funds are available. If you are interested in donating to our scholarship fund (not tax-deductable), you can go online to do so here: https://rootedcarrot.coop/donate/.

If you missed this scholarship season but wish to apply for a future scholarship, email us at outreach@cedarfallsfood.coop and we’ll let you know when the application season opens again next year. We are grateful for these opportunities to continue to grow our co-op community! 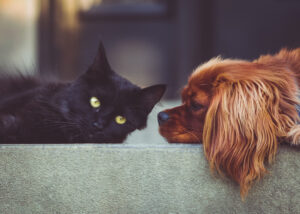 All are welcome to join us on Tuesday, November 12 anytime between 5:45 and 8 p.m. at Second State Brewing in downtown Cedar Falls for a Co-op Potluck. In honor of our furry friends, we’ll have a free-will donation there to support the Cedar Bend Humane Society.

Join us and bring a dish to share.* We also encourage you to bring your own tableware if possible to help reduce landfill waste.

If you are a co-op member-owner, please consider bringing a friend who would benefit from learning more about the Co-op. We will have member applications along with t-shirts and stickers for sale. In addition, co-op member-owners get 10% off of Second State beer draws, so don’t forget your card. We can’t wait to see you there!

*Remember, don’t stress about your dish – we prefer your presence, so if you can come but don’t have time or energy to cook, grab chips and salsa or something quick from a local store and come on over!

On October 29, the Co-op announced the results of its election for the board of directors. With 26.1% of the membership voting, Jodie Huegerich became the newest member of the board, filling the seat vacated by outgoing board member Terry Stewart. In addition, incumbents Joy Thorson and Tom Wickersham were elected to serve another term.

END_OF_DOCUMENT_TOKEN_TO_BE_REPLACED

Last month the board of directors hosted its annual member-owner meeting to provide updates on the Co-op. (Special thanks goes to Lark Brewing for letting us use their space!) 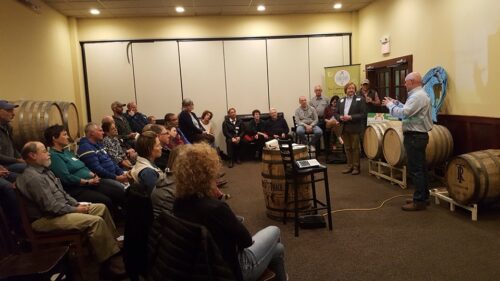 There was lots of engaging dialog and conversation during the meeting, which outlined a number of important items the Co-op has been working on since 2014. One such update is worth highlighting here: 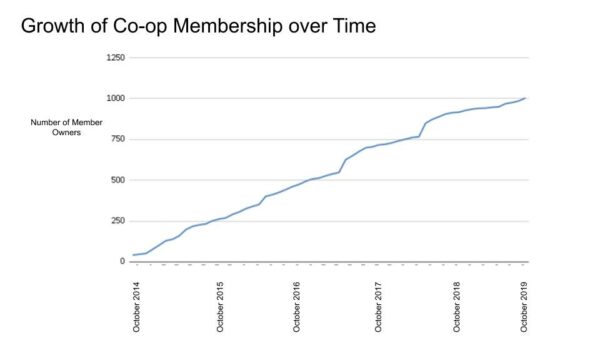 As you can see (left), the Co-op has been able to grow membership annually since incorporation. Of note, the Co-op has seen membership growth every month for the past 5 years. This is no small feat, and many other start-up food co-ops across the country are jealous of this track record.

I will be working with the board and our wonderful communications volunteers to post a more comprehensive recap of the meeting on the Co-op’s website for those who weren’t able to make the meeting. Stay tuned for more details!

What’s in a Name?
As I forecast in last month’s From the Board President post, the board did not announce a new name for the Co-op, as was outlined in our name change announcement back in May. Our timeline to change the new name was perhaps a bit too ambitious. However, we are making progress. The board has unofficially selected a new name, and we are currently working with industry consultants and other co-op experts to provide feedback on our tentative selection. If all goes well, we should finalize this decision in the next couple of months. We’ll keep you posted!

Site Updates
A big portion of the annual owner meeting was spent discussing our site search history. We provided a detailed overview of the sites that we have considered and spent time negotiating, most of which involved architectural renderings of what the site might look like upon completion. The board felt it was important to provide this information to, among other things, demonstrate just how close we have come to signing a lease and announcing a location. While we keep current site negotiations strictly confidential as per protocol for any real estate transactions for businesses of our size, it was nice to go over past negotiation history. It was evident that those members in attendance felt they gained good insight into our due diligence in securing an optimal site for the Co-op.

Special Thanks to Terry Stewart
One final item from the member-owner meeting was the opportunity to recognize outgoing board member Terry Stewart. I would just like to add a few personal notes here about Terry’s contributions over the years. 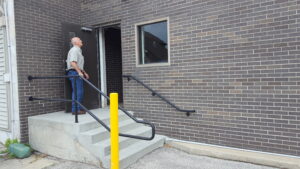 Terry’s willingness to help in just about any aspect of the Co-op’s work has been evident since nearly the beginning. He first joined the board in 2016 after Melanie Drake stepped down to assume the Outreach Coordinator position. Then, later that fall, after completing the remainder of Melanie’s term, he then stepped in again when a newly elected board member resigned. Terry volunteered to serve as Vice President, and to chair the Operations team. He helped lead efforts around the creation of our General Manager hiring materials, the work in conducting two market studies, and he has been invaluable in our site selection work. I’m pleased to report that Terry will continue on our site selection team! If you see Terry around town, please be sure to thank him for his service to the Co-op and the greater Cedar Valley community.