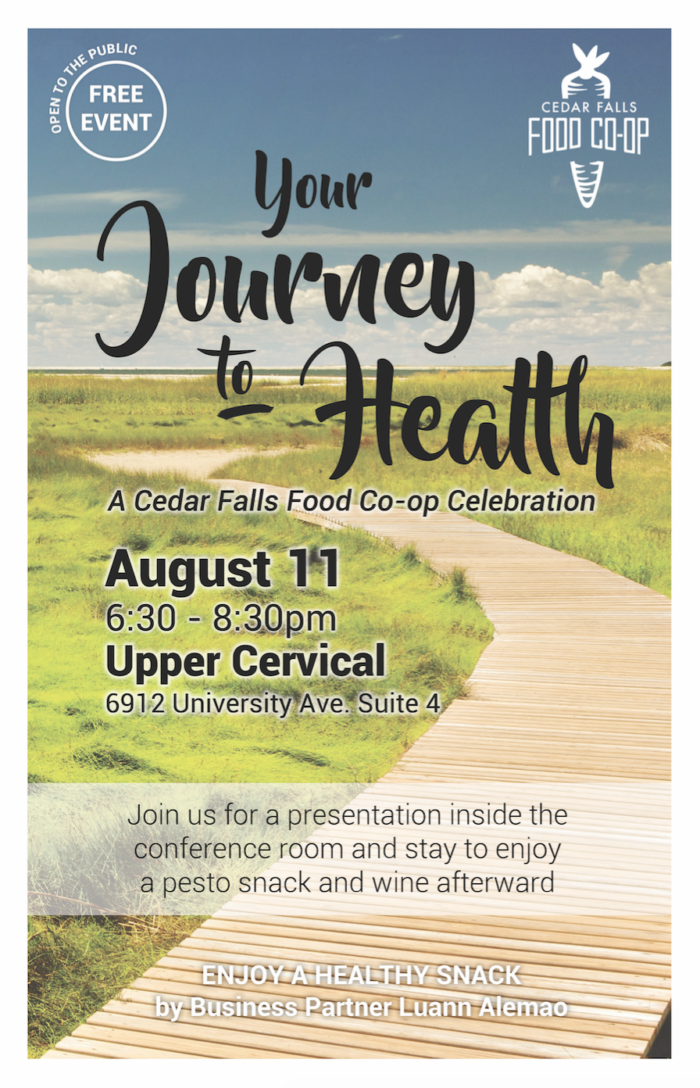 Come and enjoy, Your Journey to Health- A Cedar Falls Food Co-op Celebration. Vitalize your body, mind and spirit at this summertime event. RSVP HERE. Feel the life-force within, as you learn about the importance of spinal health, and enjoy celebrating life in the garden with Luann Allemao’s Blue Zone inspired special pesto creations. What you will learn is amazing! Let’s spend a fun evening together embracing the liveliness of the season. And feel free to bring a friend along, too.”
This event is free and open to the community. Anyone who becomes a member of the Cedar Falls Food Co-op at the event will be entered to win a free spice-blend from Luann Alemao and Associates! 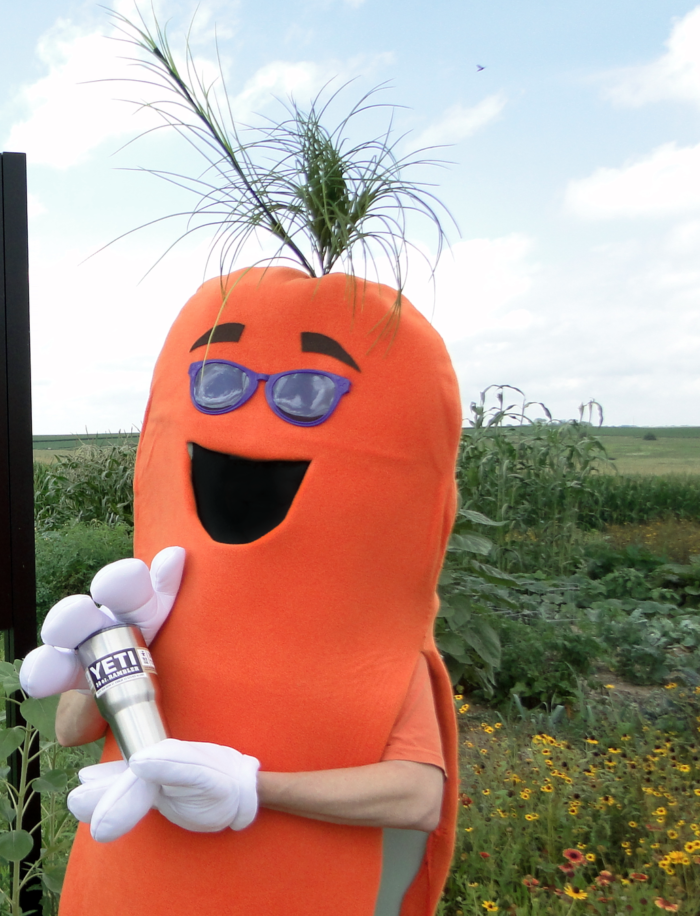 Have you heard of this amazing beverage holder that keep cold drinks cold and hot drinks hot for looooooong periods of time? Well, they are the latest rage, and we are giving one away to one lucky winner. How can you win this? By becoming a member-owner of the Co-op in August! It’s easy to join – just go HERE. You can join online or download a form. Start a payment plan or pay in full. Each new member brings us closer to opening our store.

Are you already a member-owner? You too have a chance to win something this month! Find out how HERE.

Take a minute and see what the Board of Directors have been up to this month. 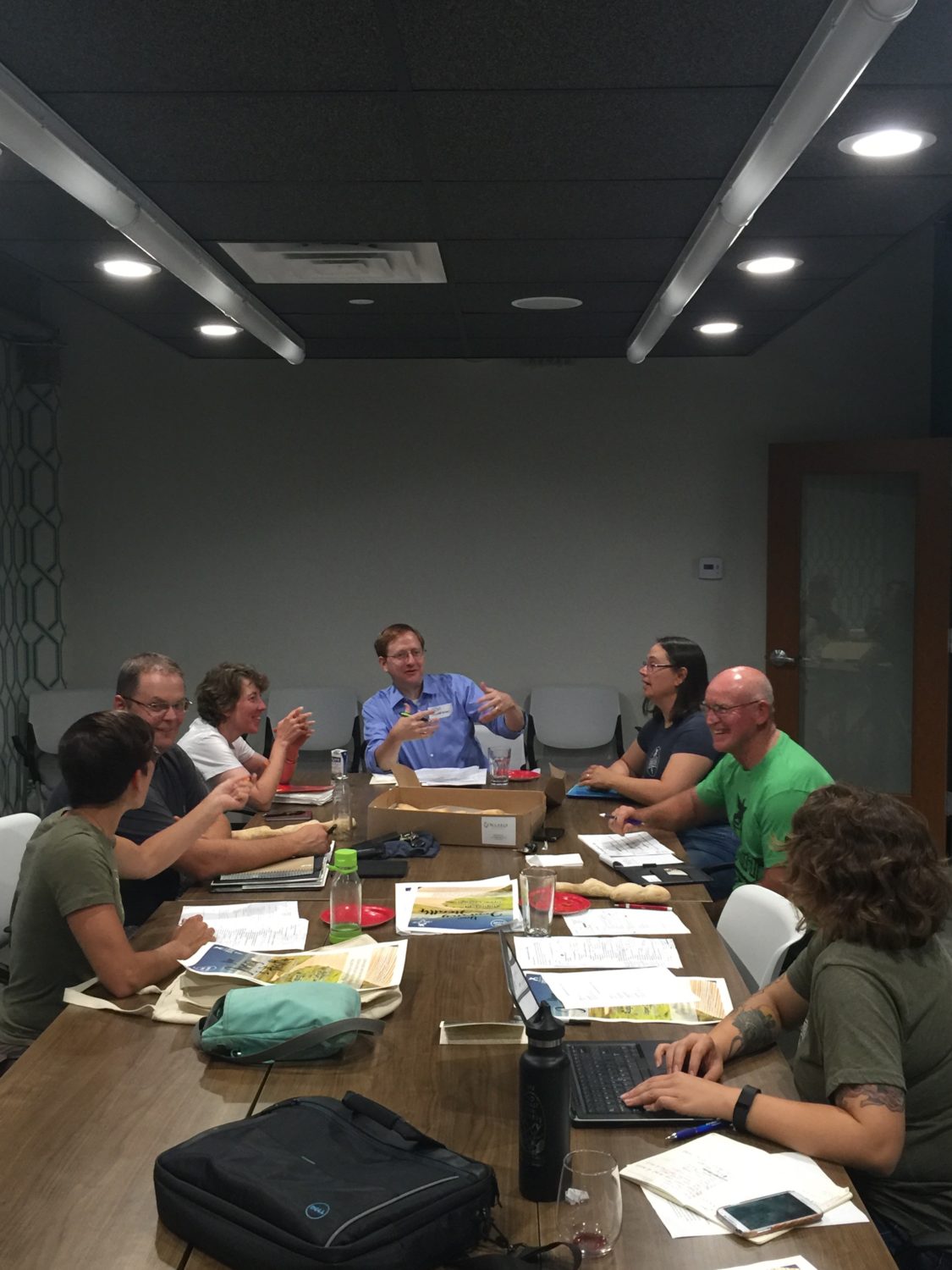 How about some quick numbers to start out? The Co-op is not quite 2 years old, but we’re over 400 members strong. Cedar Falls Food Co-op members live in 5 states (yowza!) and in one of those states, Iowa, they reside in 9 counties. Here in the greater Cedar Valley, from La Porte to Waverly, 16 zip codes are represented by Co-op members. There are also 12 households with 2 member-owners under the same roof!

Here’s another important Co-op number: nine. That’s how many people are serving on the Board of Directors. So, while 400+ member-owners each have a say and a stake in the well being of the Co-op that we all own, there are 9 people doing the bulk of the work in raising the awareness, developing the policies, managing the books, and growing the membership.

I have had the honor of working alongside these dedicated Board members. They, along with the 3 directors whose terms ended last year (yet who each continue to serve on committees), have been among the most inspirational people to me. Their wisdom and their wit…their dedication and their determination…their enthusiasm and their energy—simply put, they are AMAZING people, and I consider myself a lucky person to have the opportunity to work with and be inspired by them.

But, as the bylaws dictate, and as best practices recommend, it’s time to open the doors to other member-owners to serve on the Board of Directors. Each year 3 terms end, and so now we’re accepting applications for those who want to contribute to and help guide this effort to a successful outcome—opening the doors. Those who step up and get voted in as Board members will not only have the honor of serving alongside some of the most incredible people in the area, you’ll also be at the helm during some of the most exciting times in our development—selecting a site, designing the store layout, and hiring a general manager.

So, will YOU become a candidate for the Board of Directors? Learn more about the role and responsibilities of Board members HERE. And if you think you could contribute to the movement, submit a completed application by September 10. Be sure to brace yourself for an incredibly rich and rewarding experience! 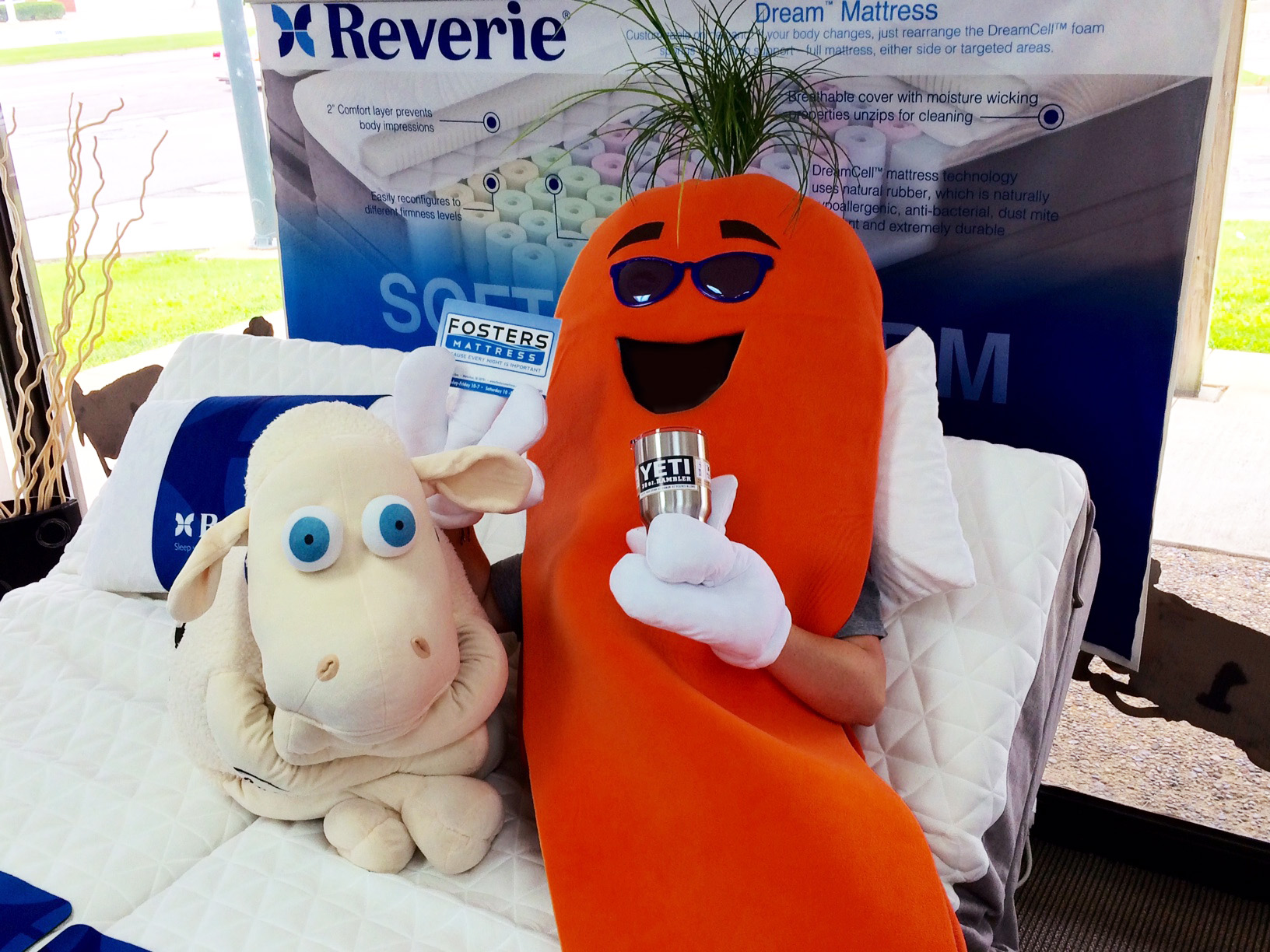 The Nameless Co-op Carrot (have you submitted your idea on our Facebook page yet?) has left six carrot buddies at several business partner locations around the Cedar Valley for you to find from today until Monday, August 22nd. Your mission, should you choose to accept it: find a carrot buddy, take a selfie with it, post it to Facebook, and tag Cedar Falls Food Co-op. We’ll post a photo clue every couple days to help you out. Find at least three carrots, tag us in selfies taken with the carrot at each locations, make sure you’re a CFFC member, and you’ll be entered into our August incentive drawing: a YETI tumbler that keeps your cold beverages icy cold or your hot beverages piping hot for an incredibly long time. (All new August members will be entered into the Yeti drawing automatically, regardless of scavenger hunt participation.) Go find those carrots!

Now accepting any and all ideas for names for the Cedar Falls Food Co-op’s mascot, the Co-op Carrot. Let us know your favorite ideas. If we pick your suggestion, you can win a Co-op T-shirt! All entries must be submitted on Facebook by August 31. Finalists will be selected based on creativity and alignment with the Co-op’s mission and vision. A final selection process will take place at the Fall Food Fest on September 27. What are you waiting for? Get those creative (carrot) juices flowing! 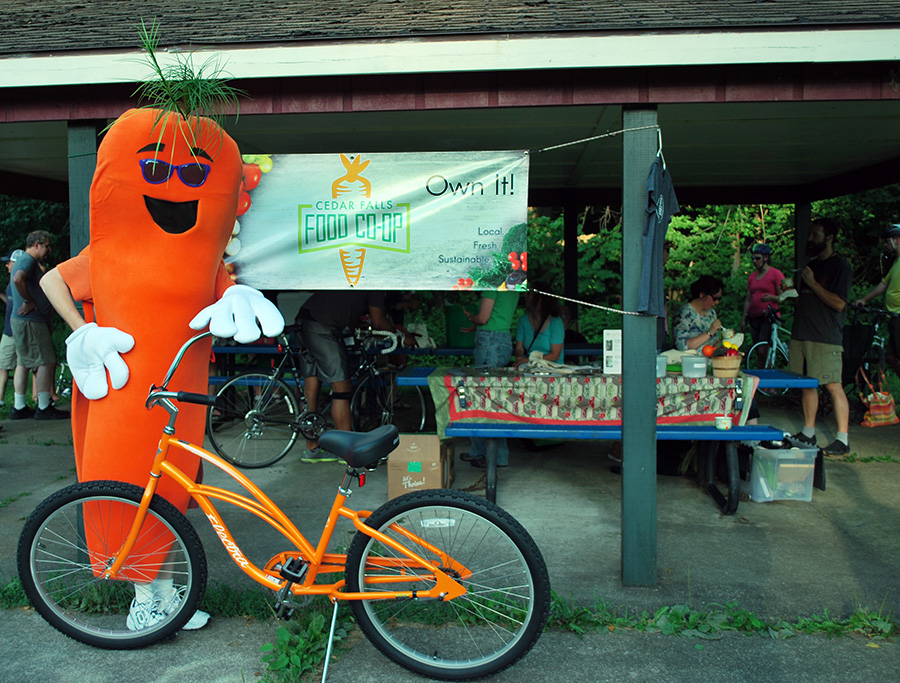 All entries must be submitted by midnight on August 31, 2016. Suggestions must be posted on the Cedar Falls Food Co-op’s Facebook page. Once a winner is selected, the winner can choose from the T-shirts currently in stock. If there are multiple entries for the same name, the judges will consider the entries submitted first. No purchase necessary. Co-op Board members and their families are not eligible.